The words of Dr. King remain as powerful and relevant today as when
they were first written or uttered more than 50 years ago. 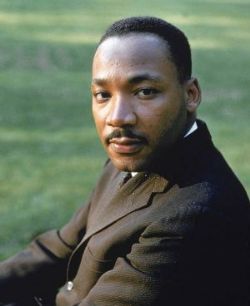 On Racism
If the present chasm of hostility, fear and distrust is to be bridged, the white man must begin to walk in the pathways of his black brothers and feel some of the pain and hurt that throb without letup in their daily lives.
~ Chaos or Community, 1967

On Capitalism
The evils of capitalism are as real as the evils of militarism and racism. The problems of racial injustice and economic injustice cannot be solved without a radical redistribution of political and economic power.
~ Address to the Southern Christian Leadership Conference board, 1967

On the Environment
It really boils down to this: that all life is interrelated. We are all caught in an inescapable network of mutuality, tied into a single garment of destiny. Whatever affects one directly, affects all indirectly.
~ Christmas Sermon of 1967

On War
I want to say one other challenge that we face is simply that we must find an alternative to war and bloodshed. Anyone who feels, and there are still a lot of people who feel that way, that war can solve the social problems facing mankind
is sleeping through a great revolution. President Kennedy said on one occasion, “Mankind must put an end to war or war will put an end to mankind.”
~ Remaining Awake through a Great Revolution, 1968

On Labor and Eradicating Poverty
Now the problem is not only unemployment. Do you know that most of the poor people in our country are working every day? And they are making wages so low that they cannot begin to function in the mainstream of the economic life uof our nation. . . If America does not use her vast resources of wealth to end poverty and make it possible for all of God’s children to have the basic necessities of life, she will go to hell.
~ All Labor has Dignity, 1968

This entry was posted in Maryland. Bookmark the permalink.