Much has happened since we sent out the October ORMD Monthly. Election Day came and went this past Tuesday with very notable results. Then late Friday night, Congress passed the Bipartisan Infrastructure Framework (BIF) but punted on the Build Back Better Reconciliation Package (BBB). In this Newsletter, we unpack these events, discuss what Our Revolution Maryland (ORMD) did over the past month, and what we’ll be doing over the next few weeks.

With the passage of BIF and the future of BBB in doubt, Our Revolution is focusing on the Freedom to Vote. To pass the transformative economic, social, and environmental policies America needs, we must elect progressives at every level. This will not happen unless every citizen – regardless of race or ethnicity – including all poor, struggling, and working-class Americans is completely free to vote! 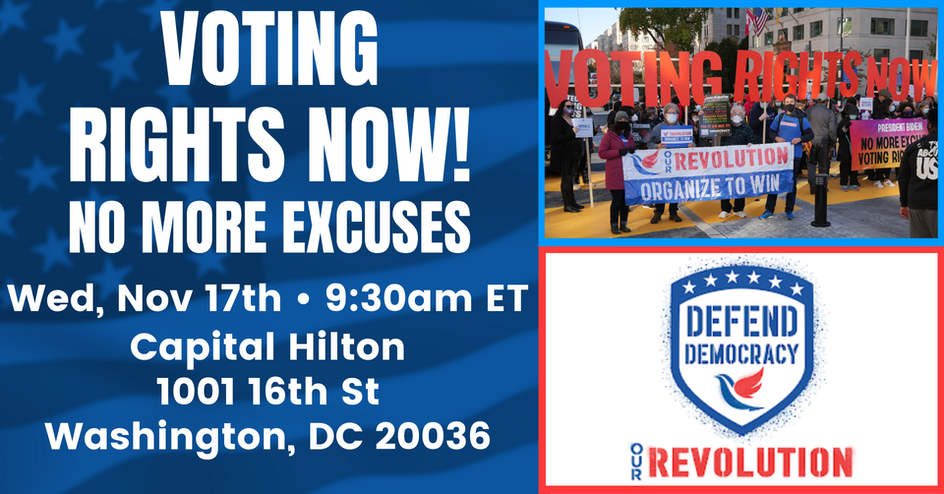 We’re gathering on Wednesday morning November 17th at Black Lives Matter Plaza right in front of the Capital Hilton to demand that the White House pressure Congress to guarantee the Right to Vote.

This will be our third and final Rally calling for Voting  Rights Now! Click on the image above or HERE to join us!

Maryland-based leaders and members, including Our Revolution Chair Larry Cohen and Montgomery County leader Joe Kirchner, practiced civil disobedience at the November 3rd Rally. We anticipate that there may be additional arrests on the 17th. Activists are urged to follow their conscience.

Our Revolution Maryland activists participated in the CASA-led Time to Deliver Rally and March on October 27th in DC.

Last Tuesday was Election Day in Maryland and across the country. In mainstream media, the phoney narrative has been that the results demonstrate that progressives and progressive policies are unpopular. Their Exhibit A is that Clintonian Terry McAuliffe lost the governor’s race in Virginia after declaring his opposition to Medicare for All.

While centrist McAuliffe’s loss cannot fairly be laid at the feet of progressives who did not support him in the March gubernatorial primary, the defeat of progressive India Walton in the Buffalo Mayor’s race by incumbent Byron Brown is painful. Brown, who lost to Walton in the Democratic primary, launched a divisive but well-funded write-in campaign and won handily. Buffalonians apparently were not prepared to elect an avowed “Democratic Socialist.” 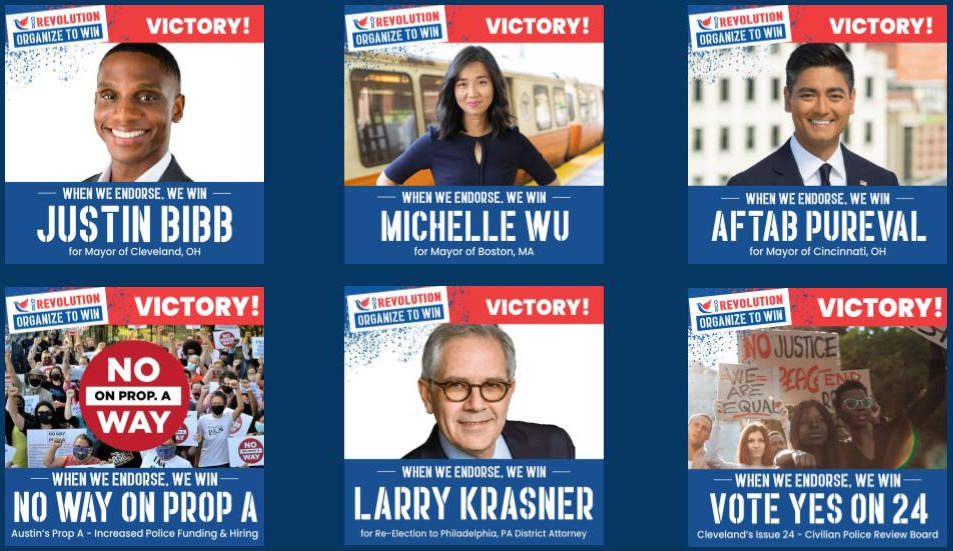 Even with the clouds though, there were a number of silver linings which corporate news has been downplaying.

In Maryland, we’re pleased that 1) Greenbelt voters approved a referendum to study whether to pay reparations to descendants of slaves and 2) returned our endorsed candidate Colin Byrd to the City Council. We acknowledge our disappointment that Colin did not receive the most votes of all the candidates and therefore will no longer serve as Mayor.

In Annapolis, two of our three endorsed candidates for City Council – DaJuan Gay and Rob Savidge currently enjoy big leads in the count and write-in candidate Toni Strong Pratt is down by only three votes.

The primary takeaway from the off-year election results is clear. Neoliberal Democrats cannot prevail if their only argument is that they’re not Trump. Instead, the Democratic Party must champion economic and social legislation that immediately improves the lives of poor, struggling, and working Americans.

For the past several months, Our Revolution and Our Revolution Maryland have prioritized passage of the Build Back Better (BBB) provisions in the proposed Budget Reconciliation Package. Our strategy has included pressuring House Democrats  not to vote in favor of the Bipartisan Infrastructure Framework (BIF) before approval of BBB.

This past Friday, however, the House joined the Senate in voting for BIF as stand-alone legislation. Sustained pressure from President Biden and Speaker Pelosi coupled with assurances that Democratic conservatives would support at least some progressive BBB elements led to BIF’s passage.

With the Budget Reconciliation Package still a work in progress, we must keep the pressure on Congress to maintain critically important provisions like drug price negotiations, protections for working families, and Green New Deal policies.

Ultimately, these ongoing challenges demonstrate the value of Our Revolution’s inside-outside strategy. We work with progressive legislative allies to push for systemic change from the inside. At the same time, we aim to hold Congress accountable by rallying in the streets when it proves reluctant to take on corporate elites.

Our Revolution Maryland’s statewide public meeting, Wednesday November 3rd, on how best to tackle the Climate Crisis and transition to clean green energy.

Charles County State Senator Arthur Ellis joined us for the first time. He persuasively touted the benefits of a light-rail project serving Southern Maryland which would generate significant benefits for our environment, our health, and our economy! Jared Schablein from the Lower Shore Progressive Caucus presented the overwhelming case for off-shore wind energy.

The meeting ended with a lively debate over the costs and benefits of a fossil fuels tax. 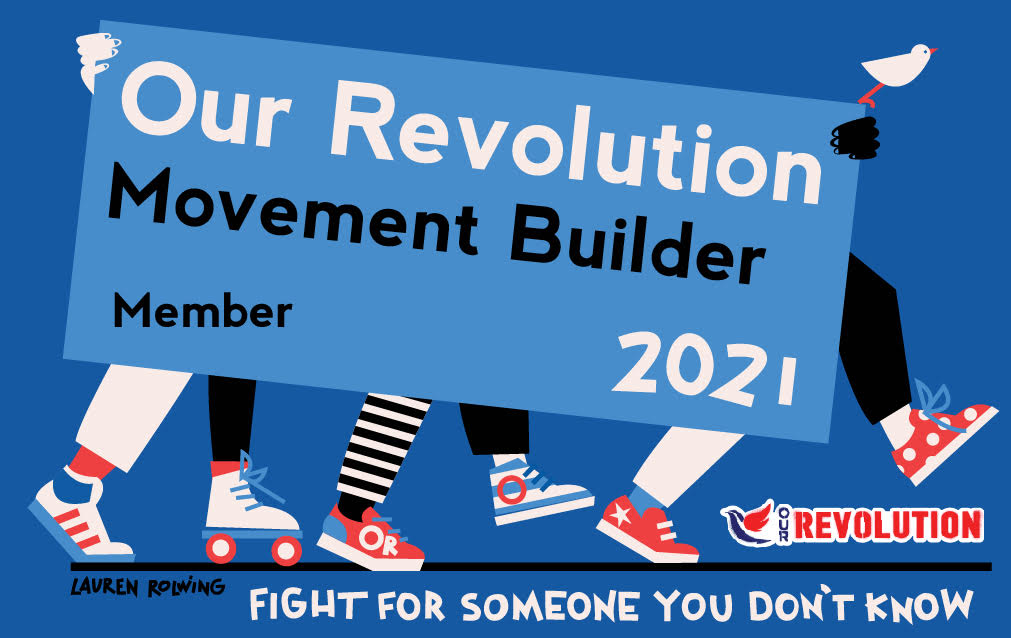 We hope you’ll consider becoming an Our Revolution Maryland Member and recurring donor if you’re not one already. Members decide our endorsements and there are many important elections coming up in 2022 in Maryland!

You may also make a one-time donation. Our Revolution is entirely small-donor funded. Without your contribution, we cannot continue to organize to win!

Currently, ORPG is fighting against an “October surprise” that six members of the Prince George’s County Council (Davis, Harrison, Taveras, Turner, Hawkins, Franklin) sprang on their colleagues and on county residents.

Over the past year, an appointed Redistricting Commission has been developing via a publicly transparent process a new County Council District Map. This is necessary given slight population shifts within Prince George’s County. A vote was anticipated before the end of the year. However, six council members presented on October 14th a new, gerrymandered district map, which they had developed behind closed doors and with no public input.

ORPG is asking county residents to join their Letter Campaign calling on County Executive Angela Alsobrooks to speak out against the “surprise” map and in support of the plan proposed by the Redistricting Commission.

If you’d like to join ORPG in these important efforts, email Chair Suchitra Balachandran.

Our Revolution Montgomery convened a virtual meeting on October 17th and a live Halloween meeting in Wheaton. We highlighted various candidates for county and state offices. To get involved in ORMoCo, as we ramp up for the 2022 elections, please email Co-Chair Kat Uy.

Our Revolution Baltimore City/Baltimore County will convene on November 15th at 5:30pm for its November Chapter Meeting. The topic is current plans for redrawing county, state, and congressional districts. RSVP HERE.

Our Revolution Howard reports the following areas of activity:

Our monthly membership meetings are on the second Wednesday of the month. We’re meeting November 10th 7:30-9pm on ZOOM. RSVP HERE 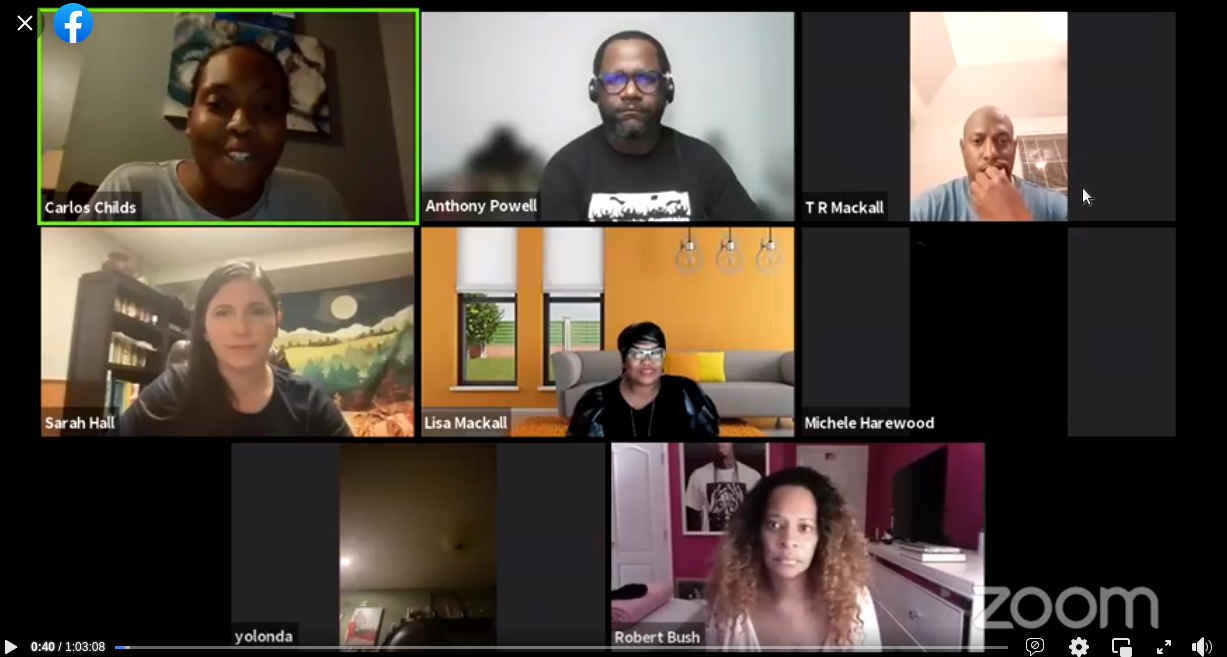 Our Revolution Southern Maryland and the Maryland Poor People’s Campaign held a Criminal Justice Town Hall on October 28th. We addressed the impact of economic disparities on crime rates and how strong police accountability boards reduce police violence.
WATCH HERE
Get involved with our chapter by emaiing Co-Chairs Cris Parque or Sarah Maria Hall. Our Facebook page is here.

Our Revolution Western Maryland is promoting the No Developer Money Pledge that Our Revolution Howard initiated. We
forwarded it to our alles in Washington County and went public with it a
week ago. Kai Hagen, a Frederick County Executive candidate has signed. We will be sending the pledge to all announced
candidates in the next few weeks. Our next chapter meeting will be in January. We thank ORHoCo for getting out front with the pledge.

The Lower Shore Progressive Caucus remains extremely active. Based in Salisbury and

serving Wicomico, Worcester, Dorchester, and Somerset Counties, LSPC raises funds, supports progressives and is fighting to preserve the extraordinarily bounteous environment of the Chesapeake Bay region. They meet on the first Wednesday of each month. Email Chair Jared Schablein for more information and to get involved.

A copy of Our Revolution Maryland’s current financial statement is available by request to Hal Ginsberg, 4220 Franklin Street, Kensington, MD 20895 or by calling (240) 283-7262. Documents and information submitted under the Maryland Solicitations Act are also available, for the cost of postage and copies, from the Maryland Secretary of State, State House, Annapolis MD 21401, (410) 974-5534.

This entry was posted in Maryland. Bookmark the permalink.